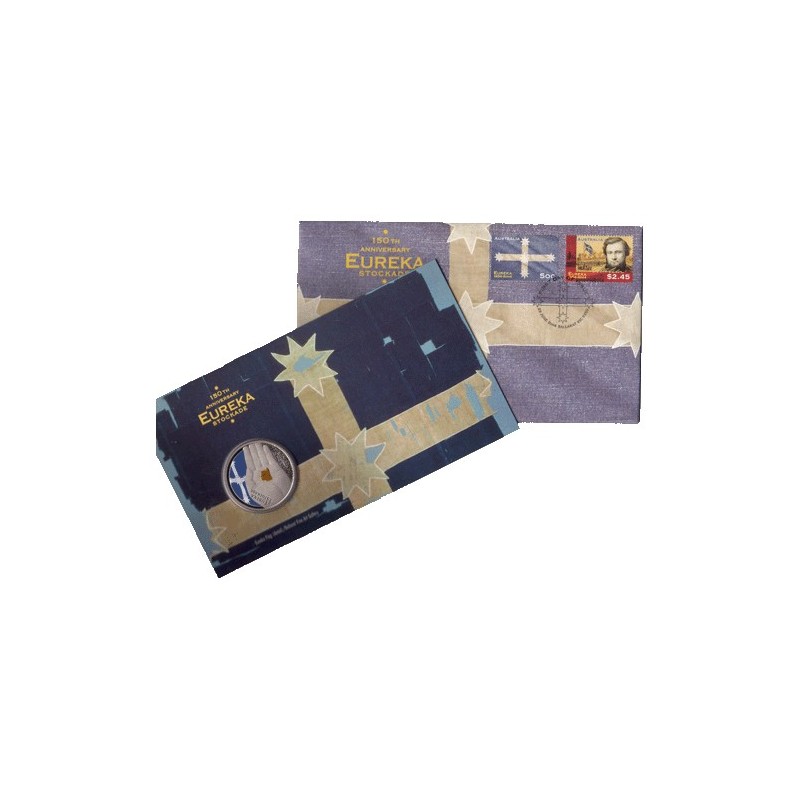 The Perth Mint has added a coloured $5 coin struck from cupro-nickel to its suite of commemorative products marking the 150th Anniversary of the Eureka Stockade.

It is the first base metal Australian legal tender collector coin struck by the Mint in its 105-year history.

The coin's reverse depicts a frosted image of a miner’s hand with a gold-coloured natural nugget in its palm. A coloured image of the Eureka flag – a blue background featuring the five stars of the Southern Cross constellation connected by a white cross - appears in the background.

The words EUREKA STOCKADE 2004 are also included in the design.The obverse features Ian Rank-Broadley's effigy of Her Majesty Queen Elizabeth II, and the monetary denomination.

The uncirculated quality coin is mounted on a colour card depicting part of the original Eureka Flag, flown by disgruntled diggers near Ballarat in 1854 in protest against unfair treatment on the Victorian goldfields. Their ensuing confrontation with government troops, which left many miners dead and injured, is depicted on the back of the card in a detail from Charles Alphonse Doudiet's painting 'Eureka Slaughter 3rd December 1854'.

The card and coin come in a first day cover envelope printed with another image of the famous Eureka flag. The same image of the flag is reproduced in its entirety on a 50c Australia Post stamp, one of two postmarked with a first day of issue cancellation bearing the date 29 June 2004.

The accompanying $2.45 Australia Post stamp portrays an image of Peter Lalor, the leader of the diggers' rebellion, against Doudiet's picture of the diggers swearing allegiance to the Eureka flag.

Each $5 coin is issues as Australian Legal Tender.

NOTE : Does not include protective cover - available separately.