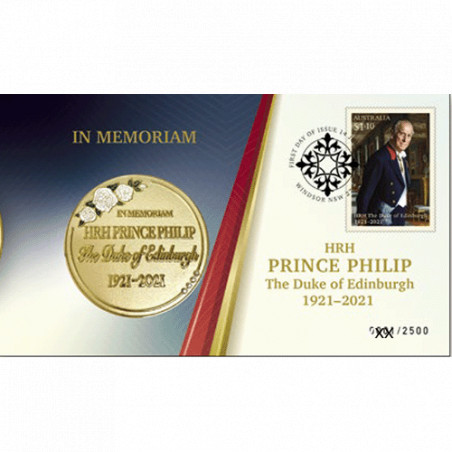 This medallion and stamp cover commemorates the life and service of His Royal Highness Prince Philip, the Duke of Edinburgh, who passed away peacefully on 9 April 2021.

Born Philip, Prince of Greece and Denmark, he renounced his titles and became a British subject in order to marry HRH Princess Elizabeth. He assumed royal duties following Elizabeth's ascension to the throne on 6 February 1952, and during more than 60 years of official public life he attended an average of 350 official engagements a year until retiring from royal duties on 2 August 2017.

The portrait shown on the stamp was commissioned from Australian-born London-based artist Ralph Heimans to mark Prince Philip's retirement.

Prince Philip poses in the Grand Corridor at Windsor Castle, where he appears very relaxed, despite being formally dressed in evening attire and wearing the sash of the Order of the Elephant.

The medallion housed in this cover depicts the Duke of Edinburgh Rose on its reverse, created  to mark the centenary of Prince Phillip's birth and celebrate his support for generations of youth through the awards. A true beauty, this medium-sized shrub rose has richly coloured deep-pink double flowers, with delicately dappled lines of white. The white roses on the medallion represent respect for and remembrance of Prince Phillip.

The obverse of the medallion features the inscription "In Memoriam HRH Prince Philip The Duke of Edinburgh, 1921-2021".

Postmarked for the first day of issue.