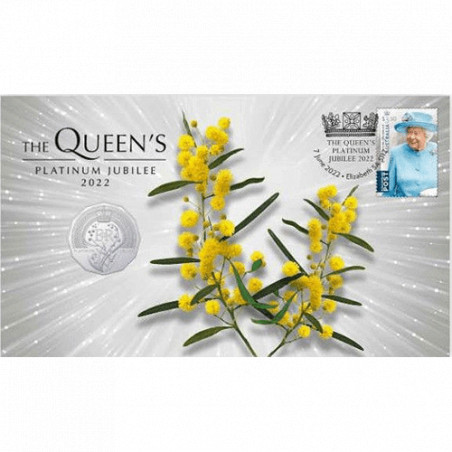 This year 2022, marks the Platinum Jubilee of Her Majesty Queen Elizabeth II, which is a celebration of an incredible 70 years on the throne.

The Queen remains the longest-reigning living monarch and becomes the only British monarch to have ruled for seven decades.

The Queen also turned 96 this year. The 50c uncirculated coin presented in this cover is from the Royal Australian Mint.

The design showcases her Majesty's monogram in the coin's centre and at the top is St Edward's Crown.

Fanning outwards are 70 additional crowns, one for each year of the Queen's reign.

Also featured are sprigs of Lily of the Valley, which formed part of the Queen's wedding and coronation bouquets, and Golden Wattle, Australia's floral emblem.

The Jody Clark effigy of Her Majesty Queen Elizabeth II, the monetary denomination, and the 2022 year-date are shown on the coin's obverse.

Affixed to the envelope is an official Australia Post International $3.50 stamp. Postmarked for the First Day of Issue 7 June 2022, Elizabeth SA 5112 along with Australia Posts seal of Authenticity.