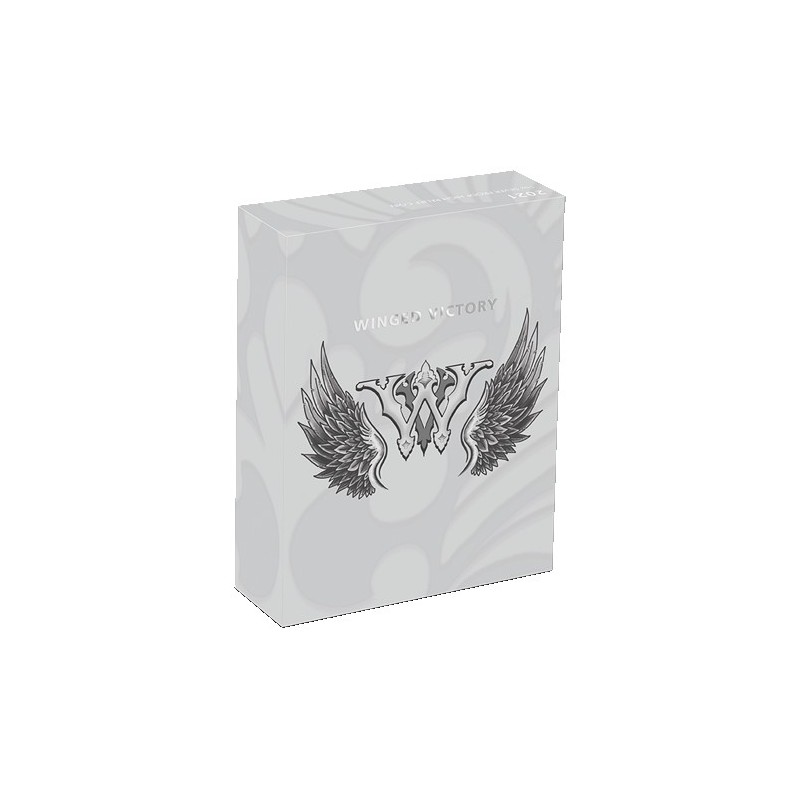 In Greek mythology, Nike was invited to live on Mount Olympus by Zeus, the king of the gods, as a reward for becoming his charioteer during the Titan War. Guiding Zeus's horses through the battlefields, she is said to have bestowed fame and glory in the form of laurel wreaths on his victorious army.

In Australia, she was the inspiration for Gilbert Doble's Winged Victory, created for the top of the Marrickville Soldier' Memorial unveiled in Sydney after World War I. Having suffered considerably from the elements, the elegant copper statue was restored and permanently transferred to the Australian War Memorial in Canberra in 2013 as an object of national significance.

The Winged Victory 2021 1oz Silver Proof High Relief Coin is struck by The Perth Mint from 1oz of 99.9% pure silver and issued as legal tender under the Australian Currency Act 1965.

The Perth Mint will release no more than 3,000 of the Winged Victory 2021 1oz Silver Proof High Relief Coins.

The Winged Victory coin's reverse features an Art Deco style interpretation of Nike. Her muscular figure, symbolising strength, is seen kneeling as she honours an unseen hero with a victory laurel in the palm of her right hand. She holds a sword in a non-threatening position low on her left side as a gesture of respect. In a magnificent design flourish, Nike's figure is enveloped in a beautifully symmetrical representation of her feathered wings. The inscription WINGED VICTORY, is also featured on the reverse along with The Perth Mints 'P' Mintmark.

The coin's obverse features the Jody Clark effigy of Her Majesty Queen Elizabeth II, the 2021 year-date, the weight and fineness and the monetary denomination.

The 12th Chief Engraver of the US Mint, John Mercanti is a renowned American sculptor and engraver and is responsible for more coin and medal designs than any other employee in the organisation's history.

The coin's high relief reverse and obverse are minted on concave surfaces to ensure the optimum flow of metal is achieved by the strike of the die.

Each coin in housed in a classic display case with an illustrated shipper, each coin is accompanied with a Numbered Certificate of Authenticity.

Pictures for illustration only - there is no shading on the coins.