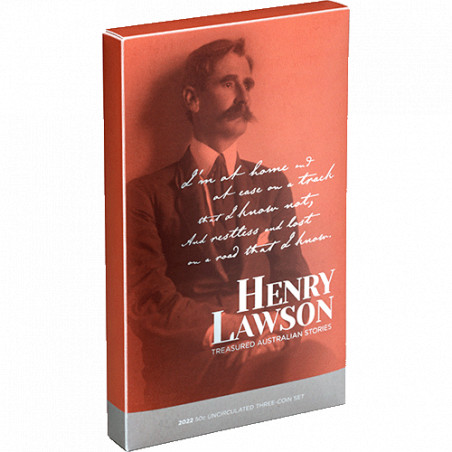 A legend of Australia literature, Henry Lawson was a gifted balladist and short story writer with a talent for narrative, atmosphere and humour.

Three of Lawson's renowned literary pieces - The Drover's Wife, The Loaded Dog and On The Edge of Plain are celebrated in this 50c aluminium bronze coin collection.

Though his best work would be valued by modern critics as comparable with that of the great short story writers, Henry Lawson's early years were not encouraging. His education was brief and shadowed by partial deafness, which, in 1881 became an incurable hearing loss.

Nevertheless, he heard and was fascinated by the rhythms of the balladists, and his own first verse, 'A Song of the Republic' (1887) and the truculent hammer-blow rhythms of 'Faces in the Street' were enthusiastically received. His first story, 'His Father's Mate' (Bulletin 1888) showed promise and he followed it in 1892 with one of the great Australia stories, 'The Driver's Wife'. When Bulletin editor J.F. Archibald, recognised Lawson's potential promise as a writer and gave him L5 and a rail ticket to Bourke, Lawson set out (892) on a journey that would be of critical creative importance.

While The Billy Boils (1896) brought together the best of his prose. In later work, Lawson wrote at greater length. The Joe Wilson series brilliantly evokes the nuances of married life in the bush, disregarding plot in favour of a realist portrayal of men and women under pressure. Meanwhile, in his verse he turned the same focus on bush romanticism, opposing Banjo Paterson's cavalier adventures with the solitary figure of a man on foot, carrying a swag.

Despite the failures of his later years, Lawson remained a popular favourite and he continues to be recognised as a central figure in Australian literary and popular culture.

Each coin features a beloved story by Henry Lawson. The Drovers Wife, The Loaded Dog, and On the Edge of a Plain.

This set will appeal to collectors, poetry lovers and those mesmerised by the romance of the Australian bush.

All three coins are presented in individual cards contained in an envelope.