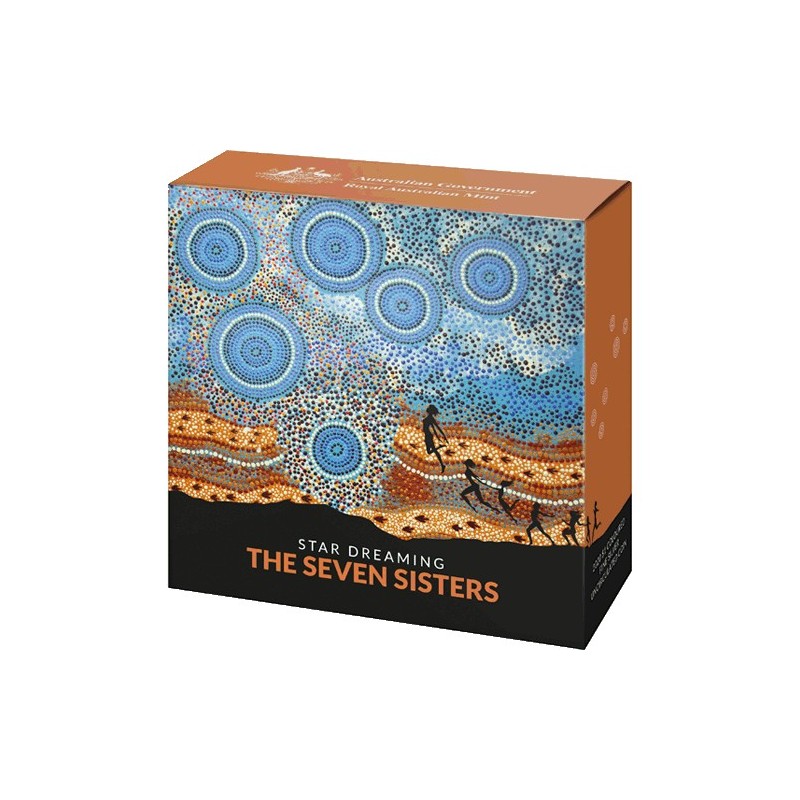 For indigenous Australians the star cluster Pleiades in the constellation Taurus is known as the Seven Sisters. Stories described them as a group of young women being pursued by unwanted male attention. Wajarri-Noongar artist Christine 'Jugarnu' Collard's artwork Seven Jojas (Sisters) is a features of the coins design. Indigenous Australians were the first astronomers and have long used the stars as maps.

The Yamaji people of the Murchison region in Western AUstralia, refer to the SEven Sisters stars as Nyarluwarri in the Wajarri language. When Nyarluwarri sits low on the horizon at sunset, the people know that emu eggs are ready for harvesting. Yamaji people use the stars to also predict seasonal rainfall by observing how bright or faded the star cluster is at certain times of the year.

The song line of the seven sisters fleeing to the sky to escape a man who wants to take one as his wife, is frequently depicted in Aboriginal paintings.

Indigenous Australians are considered the oldest civilisation in the world and aboriginal culture dates back more than 65,000 years. Aboriginal people were the first astronomers and for tens of thousands of years, the stars have been their maps, weather predictors calendars, timekeepers and lent a backdrop to important storytelling.

The coin's obverse features the effigy of Her Majesty Queen Elizabeth II design by Jody Clark.

Each coin is presented in a display case and issued as Australian legal tender.

This is the 2nd coin in the Star Dreaming series.