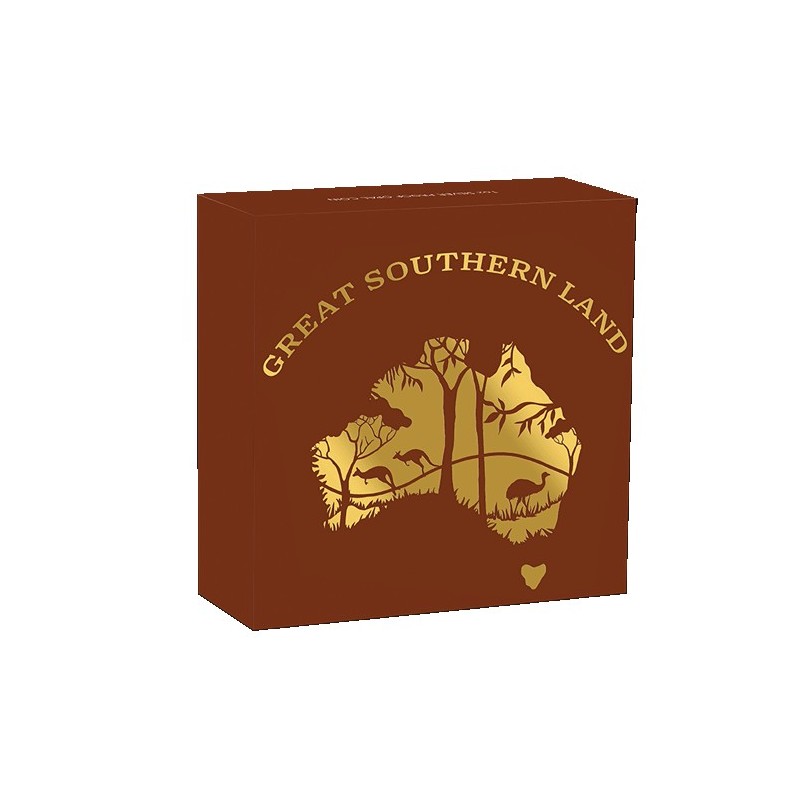 This beautiful coin features the great southern Australian continent in stunning Australian opal. Australia is the planet's sixth largest country yet the smallest of the world's continents. Evolving across more than 3,000 million years, it is also unique as the lowest, flattest and driest continent (after Antarctica) and home to a diverse range of climates, landscapes and animals.

Once recognised as the 'unknown land of the south', legends of Terra Australias Incognita date back to Roman times. The existence of this hypothetical landmass was based on the theory that continental land in the Northern Hemisphere was balanced by land in the Southern Hemisphere.

While depictions of Terra Australis on world maps varied greatly between the 15th and 18th centuries as explorers traversed the Pacific Ocean, British navigator James Cook is credited with producting the first charted maps of the east coast in 1770. The voyage of the British Royal Navy's HM Bark Endeavour led to the documentation of several previously unknown species of flora and fauna that have come to define Australia.

Struck by The Perth Mint from 1oz 99.9% pure silver to proof quality, this coin is issued as legal tender under the Australian Currency Act 1965.

No more than 5,000 of these 2020 Great Southern Land 1oz Silver Proof Opal Coins will be released by The Perth Mint.

The coin's reverse features a central opal insert in the shape of the Australian continent. The outer rim of the coin features representations of iconic animals including the kangaroo, emu, koala, echidna, wombat, bilby, Tasmanian devil, frilled-neck lizard, goanna and the eastern brown snake. The Perth Mint's 'P' mintmark is included in the design together with the 2020 year-date, and the coin's weight and fineness.

The coin's obverse depicts the Jody Clark effigy of Her Majesty Queen Elizabeth II and the monetary denomination.

Each coin is housed in a classic display case with a clear lid. Packaged with an illustrated shipper, each coin is accompanied by a numbered Certificate of Authenticity.