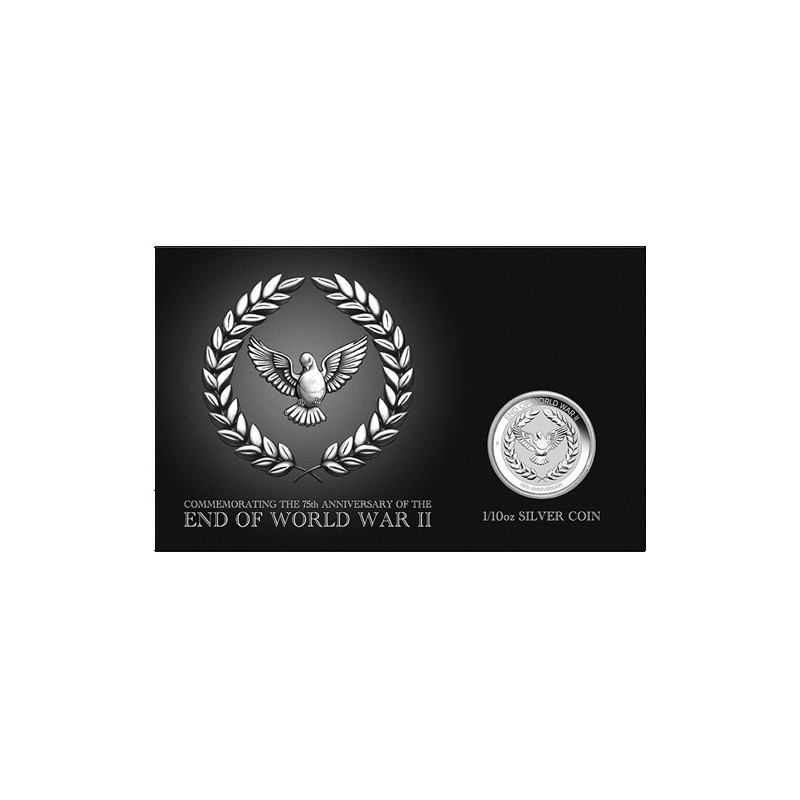 This 1/10oz silver coin commemorates 75 years since the end of World War II (WWII), which was the deadliest international conflict in history, accounting for the lives of an estimated 60 to 80 million soldiers and civilians.

From the outbreak of war in 1939, the Allied and Axis powers fought predominately in Europe and Asia, with the final battles in the European theatre, resulting in the fall of Berlin and the suicide of Adolf Hitler, taking place in the spring of 1945. War in Asia finally ended in August with the detonation of atomic weapons over the Japanese cities of Hiroshima and Nagasaki, which underlined the futility of continuing the war.

Victory in Europe Day, generally shortened to VE Day, marks the formal acceptance by the Allies of Nazi Germany's unconditional surrender on the 8th May 1945.

Victory in the Pacific (VP Day), otherwise known as Victory over Japan Day, takes place on 15 a August to commemorate Japan's acceptance of the Allied demand for unconditional surrender.

The initial euphoria experienced as WWII ended was quickly replaced with unprecedented hardship as entire cities were rebuilt, boundaries and territories re-drawn, and economies restored in the aftermath. Seventy-five years later the impact of this global conflict continues to be felt as we honour the courage and sacrifice of those who fought for peace.

Struck by The Perth Mint from 1/10oz of 99/9% pure silver, the coin is issued as legal tender under the authority of the Australian Currency Act 1965.

The reverse design features a representation of two wreaths and a dove. The inscription 'END OF WWII 75th ANNIVERSARY" and The Perth Mint's 'P' Mintmark.

The Jody Clark effigy of Her Majesty Queen Elizabeth II, the monetary denomination, weight and purity, and the 2020 year-date are shown on the coin's obverse.

Each coin is housed in a protective acrylic capsule and presented in an illustrated wallet-sized card.