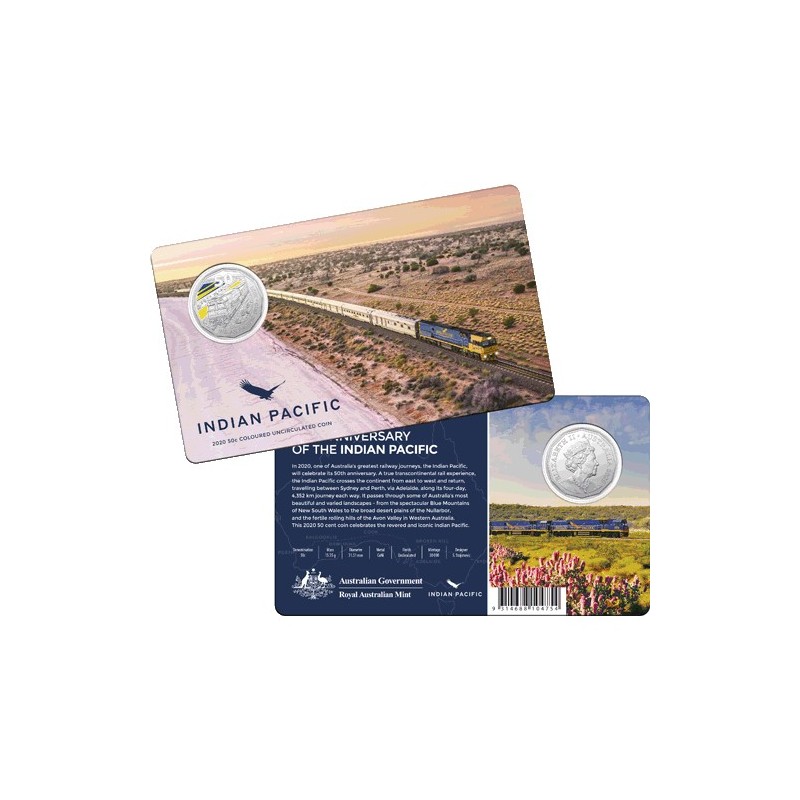 Following on from the popular 2018 3801 - A Legend of Steam and the 2019 90th Anniversary of The Ghan releases, the Royal Australian Mint presents this 2020 50c coin celebrating the 50th anniversary of the iconic Indian Pacific transcontinental rail journey. Rail enthusiasts, coin collectors and travelers will enjoy this coin honoring one of Australia's great railway adventures.

On 23 February 1970, the first Indian Pacific service left Sydney, becoming the first direct train to cross the Australian continent. This service was made possible when the east-west standard gauge project was completed several months earlier, allowing a single journey from wast to west of Australia and return.

The Indian Pacific, named for the two oceans that the train reaches on its journey, travels from Sydney across the Nullabor to Perth, taking in Broken Hill, Adelaide and Kalgoorlie. The entire journey of 4,352 km takes four days. The journey includes the longest stretch of railway track in the world : a 478km stretch across the Nullabor.

The Indian Pacific is considered one of the great railway journeys in the world. The wedge-tailed eagle logo of the Indian Pacific reflects the unique and ancient landscapes that are enjoyed by the passengers.

Each coin is presented in a full colour card featuring the iconic Indian Pacific in the beautiful Australian landscape.

The coin's reverse features a detailed representation and the distinct blue and yellow livery of the iconic NR27 locomotive, along with the obverse featuring the effigy of Her Majesty Queen Elizabeth II designed by Jody Clark.