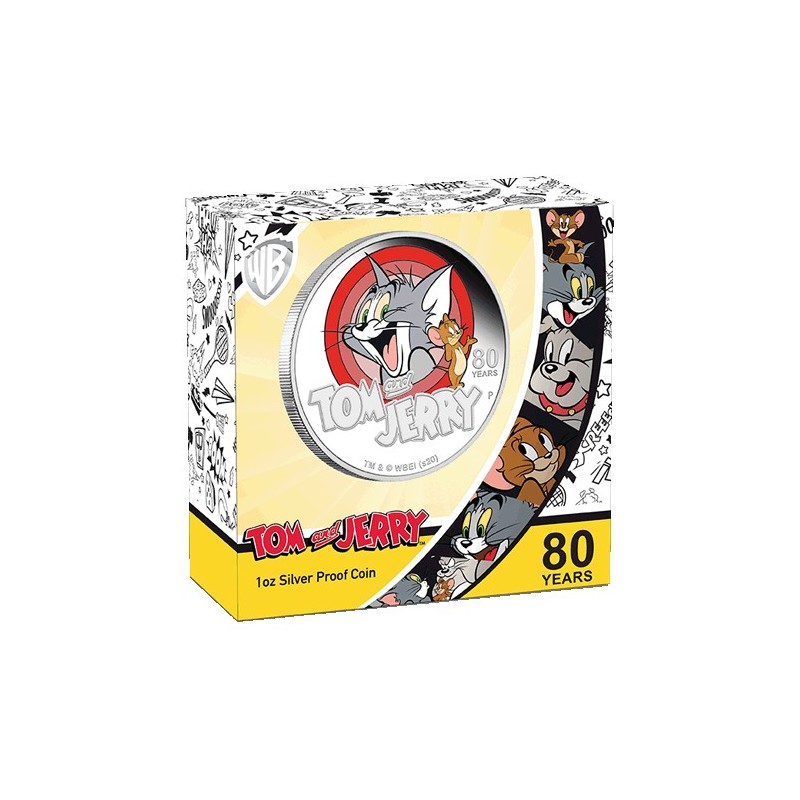 A must-have for fans of iconic animation, this fun 1oz Tom and Jerry silver coin celebrates 80 years since the adorable duo first appeared on screens.

Iconic rivals TOM and JERRY were created in 1940 by William Hanna and Joseph Barbera. First appearing in the Metro Goldwyn Mayer (MGM) one-shot cartoon Puss Gets the Boot, the cat-and-mouse duo were introduced with their current names in the follow-up 1942 short, The Midnight Snack. In each cartoon, Tom the cat would be thwarted in his increasingly rambunctious attempts to catch Jerry the mouse.

The popularity of the animation was such that by 1958 TOM and JERRY had appeared in 114 theatrical short films produced by Hanna and Barbera and won seven Oscar awards.

A further 13 Tom and Jerry shorts were directed by Gene Deitch for Rembrandt Films from 1961 to 1962. Chuck Jones, and acclaimed Looney Tunes director, produced an additional 34 shorts with Sib Tower 12 Productions between 1963 and 1967, ad three more stand-alone productions were released from 2001 to 2914 making a total of 164 shorts.

The coin is struck by The Perth Mint from 1oz of 99.9% pure silver in proof quality and issued as legal tender under the authority of the Government of Tuvalu.

The Perth Mint from 99.9% pure silver and issued as legal tender under the Australian Currency Act 1965. No more than 2,500 of these coins will be released worldwide.

The reverse of the coin features classic imagery of TOM and JERRY within concentric rings. The design also includes the Tom and Jerry logo, the inscription '80 YEARS and The Perth Mint's traditional 'P' mintmark.

The Ian Rank-Broadley effigy of Her Majesty Queen Elizabeth II, the 2020 year-date, weight and fineness, and the monetary denomination are depicted on the coin's obverse.

Each coin is housed in a classic display case with a clear lid and packaged within a themed shipper, each coin is accompanied by a numbered Certificate of Authenticity.