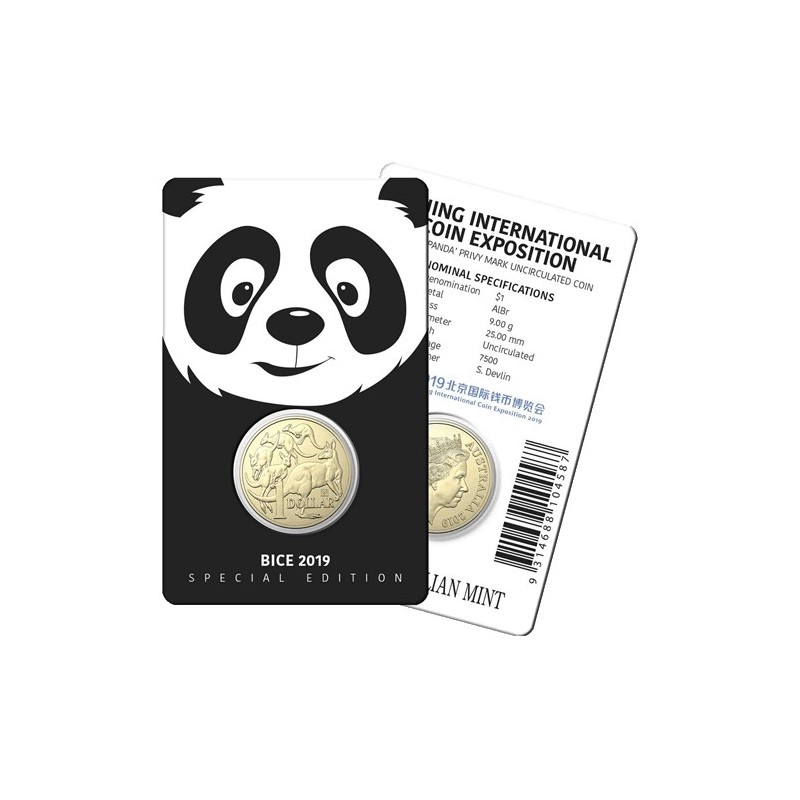 In 2019, the Royal Australian Mint will join the global numismatic community at the Beijing International Coin Exposition. This special privy marked coin is a celebration of the Mint's attendance, and a profound symbol of Australia's friendship and trade with China, with China's iconic panda taking pride of place among Australia's endearing 'mob of roos' design.

Since 1965, the Royal Australian Mint has had the privilege of producing coins with feature the iconic wildlife, historical events and celebrations which have greatly influenced our nation's story. Australia's conversion to decimal currency occurred just one year after the Mint's opening, and with it came the release of coins by the internationally renowned designer Stuart Devlin. These designs of Australia's fauna have been embraced by our nation, and have become internationally recognized symbols of a nation's pride in its unique qualities.

In 1984, Stuart Devlin added to his original suite of designs with this one dollar coin, whose reverse image has become affectionately known as the 'mob of roos'.

In 2019, the Royal Australian Mint will join coin dealers and mints from around the world at the Beijing International Coin Exposition. In addition to displaying in the Mint's own products and unity in the global numismatic community, this will be a celebration of the economic, tourism and cultural bonds between Australia and China.

Each coin features the iconic 'mob of roos' reverse design for Australia's one dollar coin.

Featuring a Panda Privy Mark, symbolising the deep ties between Australia and China.

Each coin is packaged in a special Panda-themed card

Endorsed by 2019 Beijing International Coin Exposition, with its logo featured on the packaging