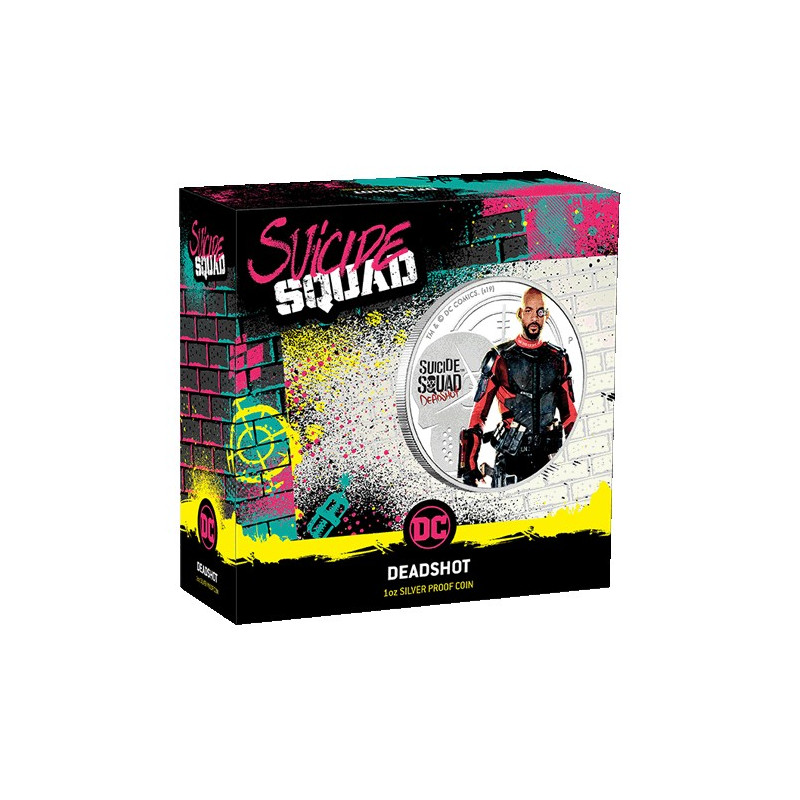 - Will Smith as Deadshot - Reverse

Deadshot first appeared in Batman #59, released by DC Comics in 1950.

Created by David Vern Reed, Lew Schwartz, and Bob Kane, Deadshot, aka Floyd Lawton, was captured by Batman and remained in prison until 1977 when, in Detective Comics #474, he escaped with the aim of destroying Batman. Armed with a high-tech laser eye, Deadshot established himself as one of the world's deadliest assassins before being taken down by the Dark Knight and sentenced to life i Belle Rever Penitentiary for the countless assassinations he committed.

Portrayed in David Ayer's 2016 film Suicide Squad by Will Smith, Deadshot was motivated by a desire to protect his daughter Zoe, letting himself be captured by Batman and put into Belle Rever at her request not to harm the Dark Knight.

The Perth Mint will release no more than 5,000 of the Suicide Squad - Deadshot 2019 1oz Silver Proof Coins.

The coin's reverse features a coloured image of Suicide Squad's Deadshot in full military gear including his iconic laser eye. Behind him an illustrated background features Deadshot's stylised icon from the film. Also included in the design is the Suicide Squad logo, the inscription 'DEADSHOT' and the Perth Mint's 'P' Mintmark.

The coin is housed in a classic display case with a clear lid. Packaged within an illustrated shipper, each coin is accompanied by a numbered Certificate of Authenticity.