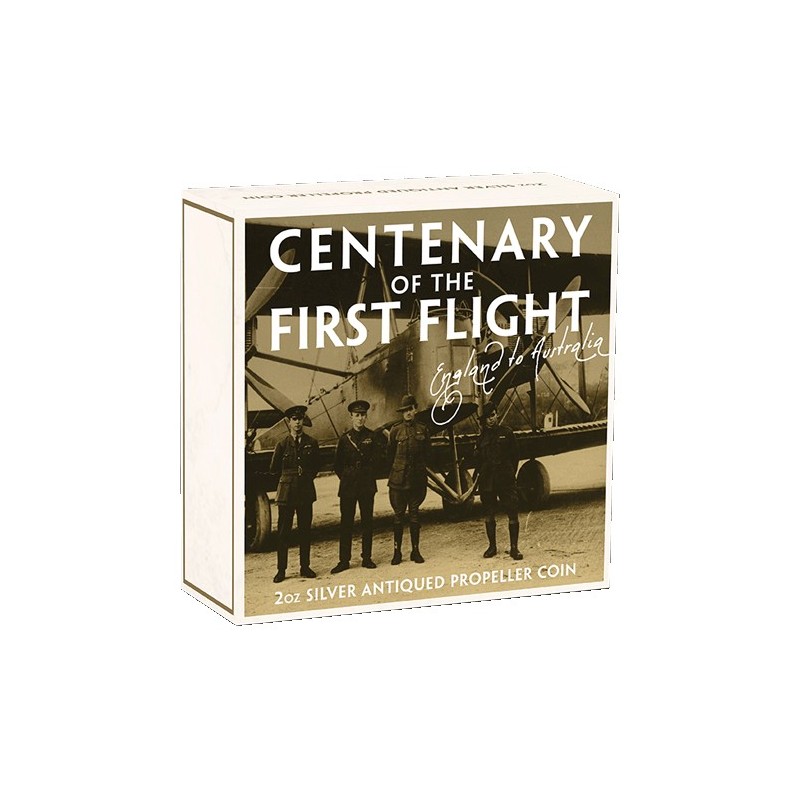 - Features a spinning propeller set into the coin's centre

This exciting new coin celebrates the 100th Anniversary of the first flight from England to Australia.

The first flight from England to Australia touched down in Darwin on 10 December, 1919. Piloting an open air cockpit Vickers 'Vimy' aircraft, Captain Ross Smith, Lieutenant Keith Smith and Sergents Wally Shiers and James Bennett made the 17,910 kilometre flight in 28 days. The amazing feat in long-distance aviation was the catalyst to develop domestic air routes across northern Australia.

Struck by The Perth Mint from 2oz 99.9% pure silver, the coin is issued as legal tender under the Australian Currency Act 1965.

No more than 2,000 of the 100th anniversary of the First Flight England to Australia 2019 2oz Silver Antiqued Coin will be released by The Perth Mint.

The coin's reverse features a map with the flight's route marked above an illustration of a mountainous landscape. In the foreground is a representation of the Vickers aircraft. The centre of the coin features a propeller inset. The design includes The Perth Mint's 'P' Mintmark and the inscription 'CENTENARY OF FIRST FLIGHT' and 'ENGLAND TO AUSTRALIA'.

Each coin's obverse features the Jody Clark effigy of Her Majesty Queen Elizabeth II , monetary denomination and the 2019 year-date.  The propeller inset is bordered by a pattern of lines portraying wind and movement.

In keeping with its historical theme, the coin has been 'antiqued' by hand to give it a unique finish conveying the surface abrasions of an age artefact. As a result of this treatment, the appearance of each coin in the limited mintage may vary.

Each coin is housed in a classic display case with a clear lid. Packaged with an illustrated shipper, each coin is accompanied by a numbered Certificate of Authenticity.