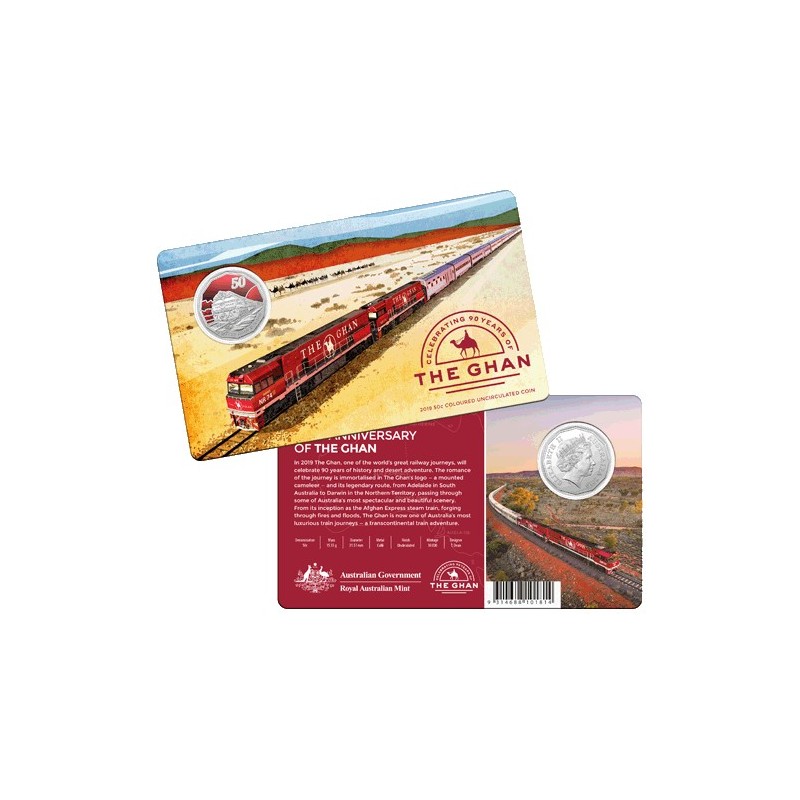 In 2019 The Ghan, one of Australia's most famous railway journeys, will celebrate its 90th anniversary. Since its humble beginnings as a steam train forging its way through fires and floods, The Ghan has become a luxurious holiday journey.

This 2019 50c Uncirculated Coin celebrates 90 years of this iconic transcontinental adventure, for train enthusiasts , collectors, and fans of the iconic Ghan.

In 1929 the Afghan Express steam train commenced its route to Stuart (now know as Alice Springs), carrying passengers, livestock and supplies. The narrow-gauge line followed the same route taken by inland explorer John McDouall Stuart in 1864. In its early days, the train's journey was rough and often dangerous. It frequently encountered fires, severe weather, flooding and once was famously stranded in the desert for two weeks.

Now known as The Ghan, the Great Southern Rail route has expanded from Adelaide in South Australia through Alice Springs, all the way to Darwin in the Northern Territory. The 2,979km journey takes four days and three night, and includes off-train excursions at Katherine, Alice Springs and Coober Pedy. Since its days as a rough steam train, The Ghan is now considered one of the world's great railway journeys and is a luxury tourist destination in its own right.

Each coin is presented in a full colour card featuring the Great Southern Rail's iconic Ghan.

The coin's reverse celebrates the 90th Anniversary of the iconic Ghan, with the obverse featuring the effigy of Her Majesty Queen Elizabeth II designed by Ian Rank-Broadley.