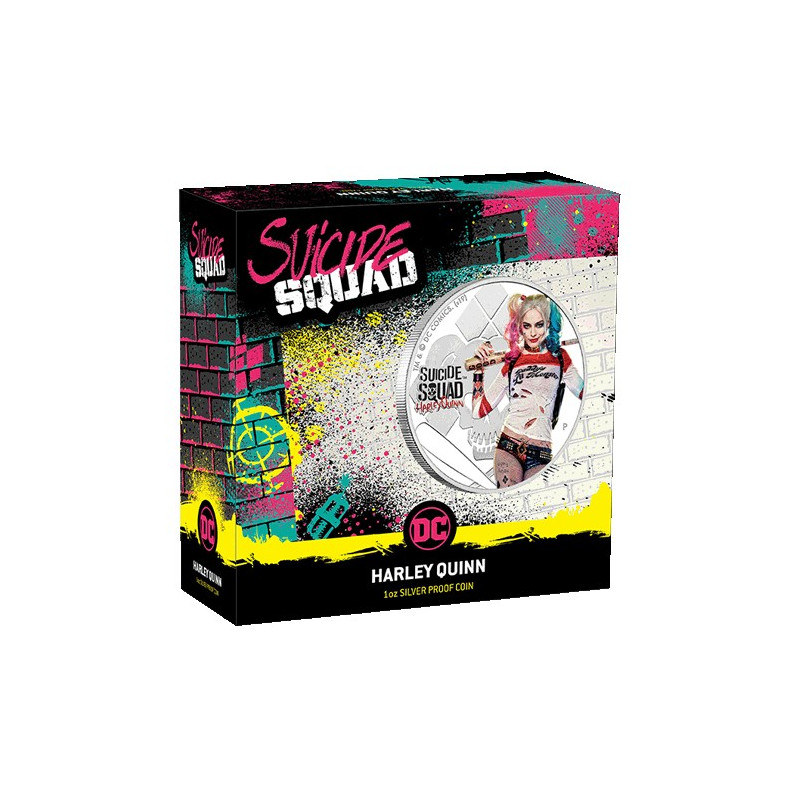 Harley Quinn is know for being a frequent lover and sidekick of Batman's arch nemesis The Joker.

As The Joker's psychiatrist at Gotham's home for the criminally insane, Arkham Asylum, Dr Harleen Quinzel developed an infatuation for the insane villain, who manipulated her in to madness. She inevitably helped him escape and devoted her life to making The Joker happy, becoming Harley Quinn and often dressing in a harlequin costume.

Athletic, agile and dangerously unpredictable in a fight, Harley Quinn is a formidable opponent in her own right.

The 2016 film Suicide Squad, directed by David Ayers, explored Harley Quinn's devotion to The Joker and the origins of the dysfunctional relationship. Portrayed by Australian actress Margot Robbie, Suicide Squad's Harley Quinn remained devoted to him even after he left her for dead when captured by Batman.

The Perth Mint will release no more than 5,000 of the Suicide Squad - Harley Quinn 2019 1oz Silver Proof Coins.

The coin's reverse features a coloured image of Suicide Squad's Harley Quinn smirking with a baseball bat over her shoulder. Behind her, an illustrated background depicts Harley Quinn's stylised icon from the film. Also included in the design is the Suicide Squad logo, the inscription 'HARLEY QUINN' and the Perth Mint's 'P' Mintmark.

The coin is housed in a classic display case. Packaged within an illustrated shipper, each coin is accompanied by a numbered Certificate of Authenticity.