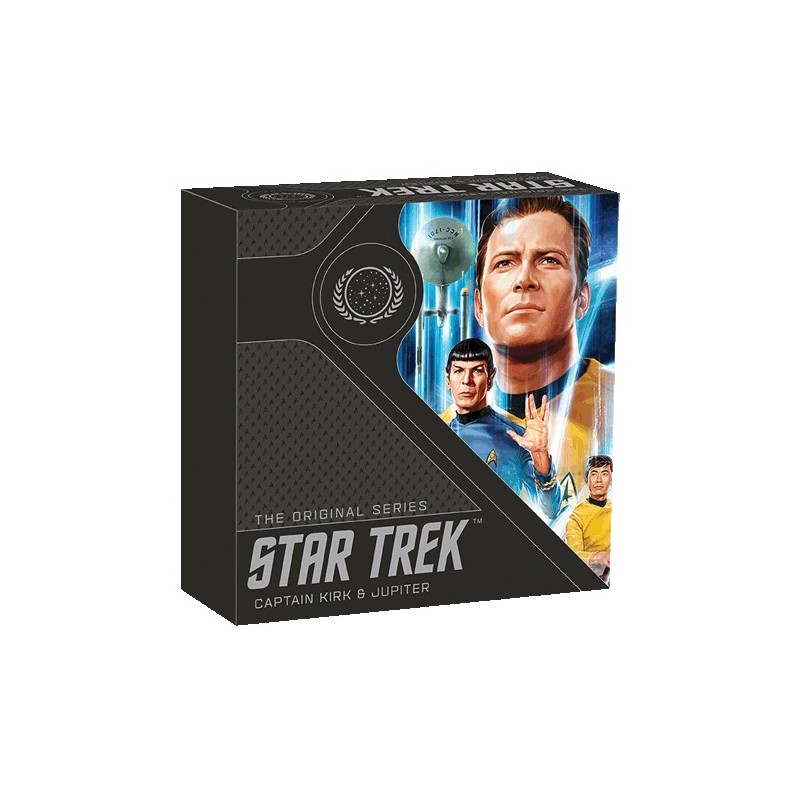 Captain Kirk was immortalised by William Shatner in Star Trek : The Original Series and in seven feature films. He also voiced the Captain in the animated version of the series. Kirk became Starfleet's youngest captain and gained a reputation for unconventional tactics that were nonetheless almost always successful.

In 2018, William Shatner suggested The Perth Mint design a Star Trek : The Original Series Kirk coin that included the planet Jupiter. The actor has since personally endorsed this release, declaring it to be 'a lovely design filled with meaning'.

Struck by The Perth Mint from 1oz 99.9% pure silver to proof quality, each coin is issued as legal under the authority of the Government of Tuvalu. Perth Mint will release no more than 3,000 2019 Star Trek : The Original Series – Kirk 1oz Silver Proof Individual Coins.

The coin's reverse features a coloured representation of Captain Kirk on the bridge of the USS Enterprise NCC-1701 and the Star Trek : The Original Series logo. Visible from the ship's viewpoint is the planet Jupiter and one if its many moons, a reference to Jupiter's personal significance to William Shatner. The design also includes The Perth Mint's 'P' Mintmark.

The obverse of each coin features the Ian Rank-Broadley effigy of Her Majesty Queen Elizabeth II, the monetary denomination and the 2019 year-date.

This  coin is presented in a Star Trek branded classic display case with a clear lid. Packaged within a themed shipper, each coin is accompanied by a numbered Certificate of Authenticity.