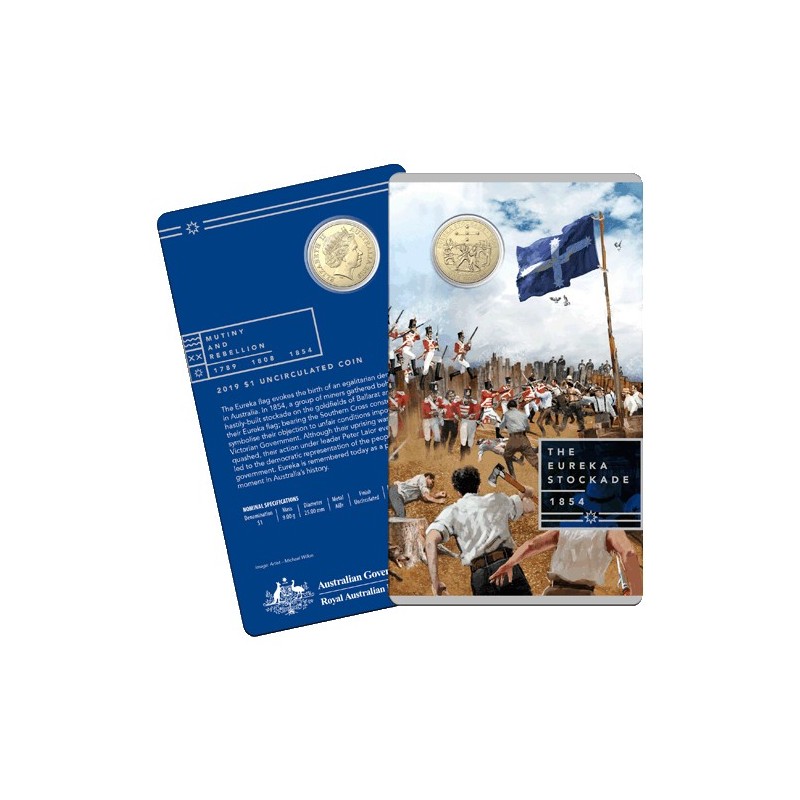 The Eureka flag that flew above a wooden stockade on the goldfields of Ballarat, Victoria, is hailed by many Australian as the symbol of an uprising that led to a more egalitarian democracy.

This 2019 $5 silver proof coin commemorates the 1854 Eureka rebellion, a bold clash between miners and the government that changed history.

The goldfield of Victoria in the 1850s were a rough place. Miners clashed with police as the government enforced unsustainably harsh fees and restrictions. A potential uprising brewed. In November 1854 rebellious miners, under their leader Peter Lalor, erected a wooden stockade on the goldfields of Ballarat, and unfurled their newly created Eureka flag.

On 3 December 1854 the tension surged into violence. A force of police and sliders, well-armed, rushed the stockade. At least thirty miners and five police were killed, with innocent bystanders caught up in the violence.

Although the miners were soundly defeated, their rebellion brought their plight to the attention of a sympathetic public and provoked a Commission of Enquiry. The eureka Stockade eventually lead to a more egalitarian government, and the Eureka flag is still valued as the symbol of an uprising that changed the face of Australia's democracy.

The reverse design reflects the violent uprising of the Eureka Stockade.

The coin's reverse reflects the drama of the Eureka Stockade.