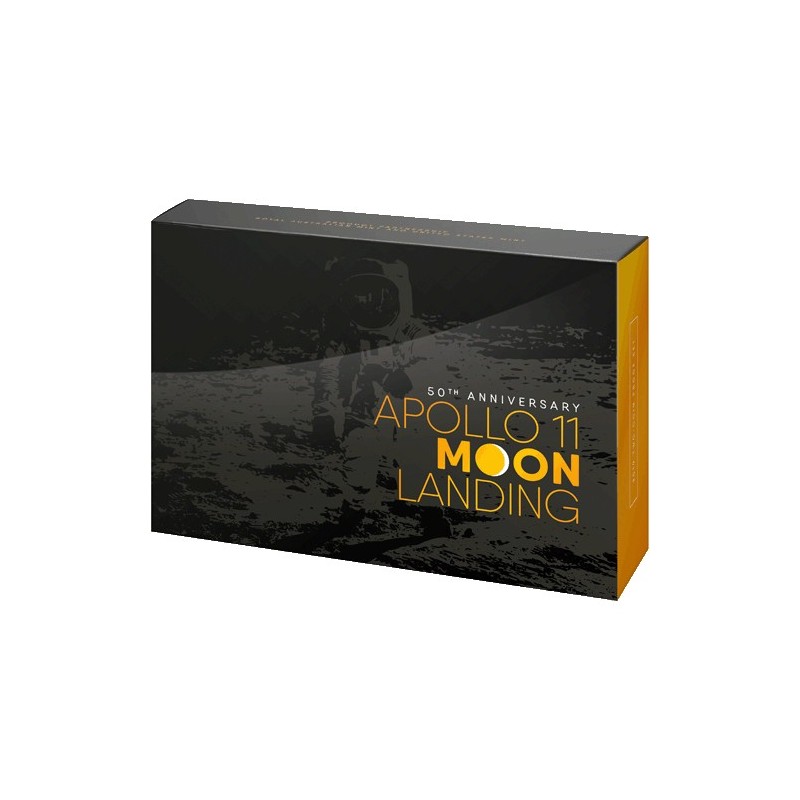 The Royal Australian Mint and the United States Mint proudly present this magnificent two-coin proof set, celebrating the 50th anniversary of the historic Apollo 11 Moon landing pf July 1969, and the scientific collaboration between our two nations that brought television of the iconic event to an estimated global audience of 600 million viewers.

For 50 years, the televised moonwalk of NASA's Apollo 11 lunar mission has been remembered as one of humanity's most significant achievements.

The goal of Apollo 11 was to send a man on the Moon and return him safely to Earth.

The Lunar Module Eagle landed on the Moon, in the Sea of Tranquility, on 21 July 1969 AEST (20 July EST). A few hours later, Commander Neil Armstrong, followed by Lunar Module Pilot Edwin 'Buzz' Aldrin, became the first humans to walk on the Moon's surface.

These 'dishes' and their Australian operators were in position to receive and transmit the telemetry and live broadcast images of the moon walk.

The obverse of the Australian coin features the CSIRO Parkes radio telescope and the effigy of Her Majesty Queen Elizabeth II sculpted by Ian Rank-Broadley, the reverse features an Apollo 11 astronaut and the lunar module Eagle, with Earth visible in the sky.

The United States obverse features inscriptions MERCURY, GEMINI and APOLLO and a footprint on the lunar surface, the reverse features a representation of the famous photograph 'Buzz Aldrin on the Moon'.

Each set includes a Numbered Certificate of authenticity signed by both the CEO of the Royal Australian Mint and the Director of the United States Mint and set in a presentation case.