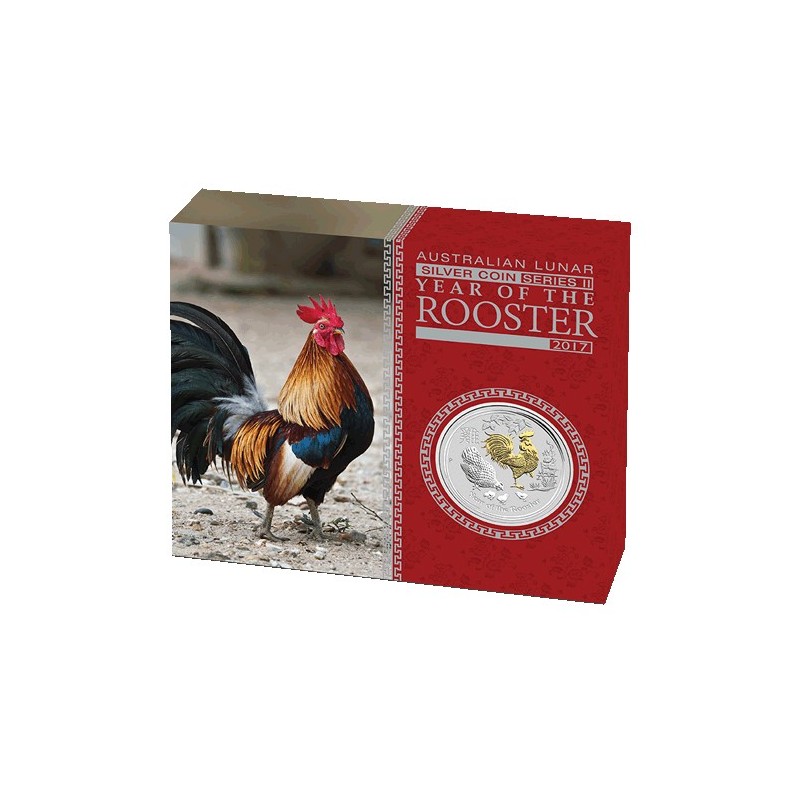 In 2017, The Perth Mint's internationally renowned Australian Lunar Silver Proof Series II celebrates the Year of the Rooster, the tenth animal in the 12-year cycle of the Chinese zodiac.

The stunning Australian Lunar Silver Coin Series II - 2017 Year of the Rooster 1oz Silver Gilded Edition is the perfect gift or collectable for those born in this anticipated year.

The Rooster is the tenth animal in the 12-year cycle of the Chinese zodiac.

Each coin is meticulously struck by The Perth Mint from 1oz of 99/9% pure silver.

Each coin is issued as legal tender under the Australian Currency Act 1965, with no more than 47,500 coins will be issued in this packaging out of a maximum montage of 50,000.

The reverse of the coin features a rooster, gilded in 24-carat gold, a hen, and three chicks standing amongst bamboo foliage and flowers. The Chinese character for 'rooster' and the inscription 'Year of the Rooster' also appear in the design with The Perth Mint's traditional 'P' mintmark.

The Ian Rank-Broadley effigy of Her Majesty Queen Elizabeth II, the 2017 year-date, and the monetary denomination are featured on the obverse of each coin.

Each Year of the Rooster Gilded Edition coin is housed in a presentation case and custom designed shipper, accompanied by a numbered Certificate of Authenticity.