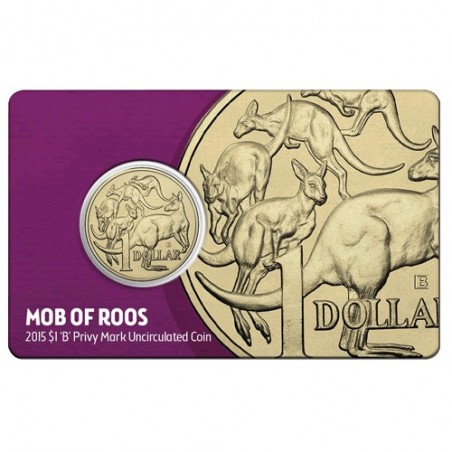 Launched at the 2015 Brisbane ANDA Show, this $1 uncirculated coin features Stuart Devlin’s iconic five bounding kangaroos design adorned with a ‘B’ Privymark to signify the location of this event.

Launched at the 2015 Brisbane ANDA Show, this $1 uncirculated coin features Stuart Devlin’s iconic five bounding kangaroos design adorned with a ‘B’ Privymark to signify the location of this event.
Whilst the Royal Australian Mint was not in attendance, their presence was felt with this special limited mintage show release in support of ANDA>

First featured on the British coinage of King Edward III, the privy marks were used as a secret mark to identify the period n which the coin was struck.
In 1991, the Royal Australian Mint explored and modified this concept, allowing visitors to the Mint to strike their own ‘C’ for Canberra coin on the gallery press.
Then in 1993, to share this experience with customer Australia-wide, the Mint took the mobile coin press to shows and fairs, striking the one dollar coin with a counterstamp to signify the location of the event as a souvenir.

To this day, the Australian one dollar coin continues to be a world-renowned design from the Royal Australian Mint. It is fitting that this year this iconic design will be resented with a special ‘B’ privy mark in recognition of the celebrated Brisbane ANDA Show.

The reverse design features the iconic ‘mob of roos’ design with a special ‘B’ for Brisbane privy mark to signify the location of the show.

This coin has a limited mintage of just 5,000 coins.

Each coin is housed in a special Brisbane packaging.