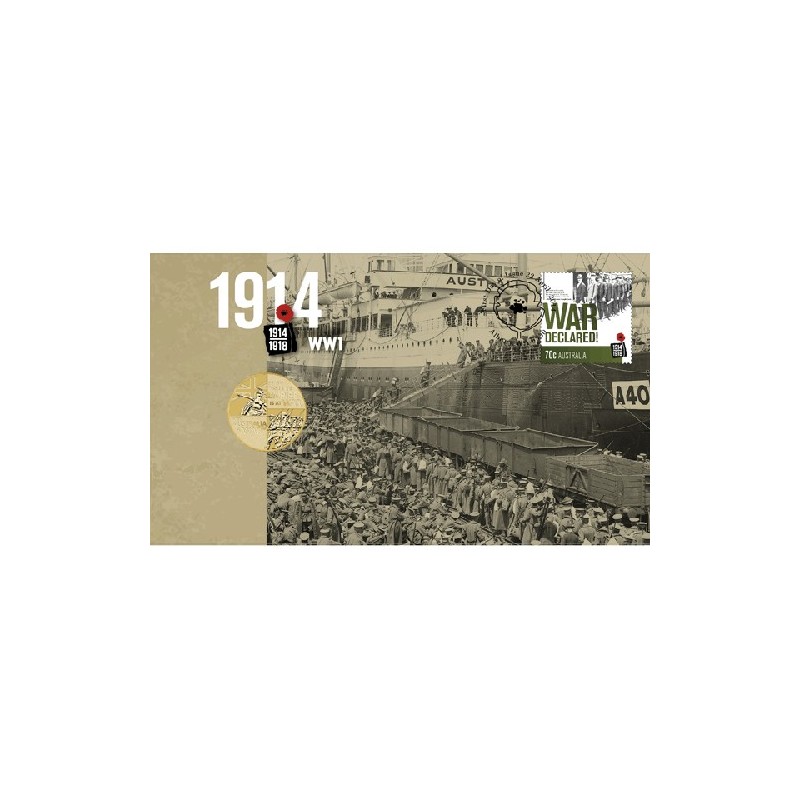 The Perth Mint and Australia Post are commemorating a century since WWI was first declared with a 2014 ANZAC Declaration of WWI Stamp and Coin Cover.

The Perth Mint and Australia Post are commemorating a century since WWI was first declared with a 2014 ANZAC Declaration of WWI Stamp and Coin Cover.

As the British declared war on 4th August 1914 the Empire responded with great support. In Australia, it was a chance for the fledgling nation to prove itself in battle and to rally to the cause.
Prime Minister Andrew Fisher declared, “Australian will stand beside our own to help and defend Britain to our last man and our last shilling”.

Volunteers swamped recruiting offices to join the Australian Imperial Expeditionary Force. Most Australians believed the ware would be over quickly, and participation would mean a chance to travel and see the world.

The first campaign Australian troops were involved in was in German New Guinea when the Australian Naval and Military Force was dispatched to seize the German colonies in the Pacific in September 1914.

Commemorating this important part of Australian history,, this uncirculated aluminium bronze coin is housed ion a beautifully designed card with window to reveal the coin’s reverse and obverse designs.

The coin’s reverse features a group of soldiers marching underneath a representation of Britannia, wearing a Corinthian helmet, symbolic of British liberties and democracy.

The inscription, ‘1914 – When the Empire is at War, so is Australia at War’ along with the ‘P’ Perth Mint’s mintmark.